Hey, All! How have you been? I appreciate those of you who have reached out and asked why you haven’t heard from me in awhile. I have been busier than even I thought….So, what have you been up to? I hope you’re healthy and happy. Here’s what’s been happening:

SO…I haven’t published my most recent gigs, simply because they weren’t open to the public. The next public event on my schedule is Crown King Saloon, Saturday, July 7th at 7pm. In the works is Augie’s Prescott and American Legion Post 79 in Yarnell. I’ll keep you informed! I’ll also be performing my song, “Blazing Honor” in tribute to the 19 Granite Mountain Hotshots on June 30th at the Memorial Service: 4pm, Yarnell Community Presbyterian Church. 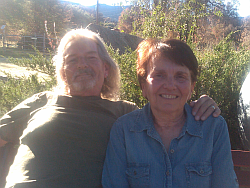 We recently had the pleasure of a wonderful visit with Walt and his lovely wife of 44 years, Dolores, in their comfortable Glen Ilah home – a home that certainly mirrors the couples’ various interests, and their individual personalities. From exotic birds in a cozy sunlit atrium, to a park-like scenic fish pond, complete with a bench made for two, the house truly is their home. Walt and Dolores met in Manhattan, and it’s no secret that they are both New York natives. As soon as one of them speaks, an accent only found in NYC emerges in their speech. It’s a pleasant sound, not harsh, and this author finds it amusing (since I am a Jersey native).

Both Walt and Dolores have compelling stories to share, and both are forthright in recounting their memories. There is no pretense – who you see is exactly who you get – an admirable quality in today’s often fabricated world.

We began our visit by being introduced to “Sonny” and “Cher”, and none of us can be sure 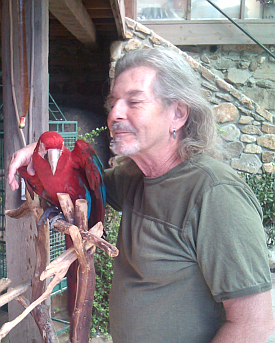 which one should be called “Sonny”, and which one should be called “Cher”. A blood test is needed to precisely indicate the gender….Walt’s educated guess is the names fit accurately. Sonny and Cher are two of the most vividly colored tropical birds I have ever seen in person. They are housed along with a Cockatoo, called Tango, and another parrot-like pet, in the home’s glassy sunlit atrium. These birds are impressive! Cher likes to kiss Walt, and she savors spreading her wings in a proud moment. Cher is not caged, but as Walt and Dolores explained, she could easily pummel any one of the house cats if needed.

As we entered the upstairs living space, Walt made mention of some beautiful artwork in 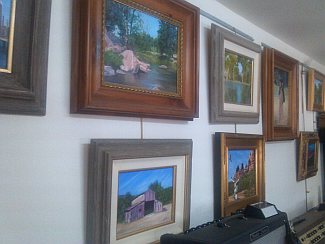 the hallway, accomplished by talented artists he knows personally. When we entered the Eckes living room, he showed us some more paintings, some of which are so clearly defined I thought I was viewing photographs. These paintings were the result of Walt’s inspiration and his own paintbrush. There is no “abstract” in his creativity. His talent is indeed a reflection of his no-nonsense personality, what he sees is what he paints. But it’s deeper than that: when I asked Walt what artist inspired him the most, he shared a memory from an art class he attended years ago. He related that there he was, with a blank canvas, all the necessary tools, other art students and a teacher. In front of them was a poignantly captivating scenic view. The teacher said, “Okay, class, let’s get painting.” But Walt felt nothing at that moment; the view was great, but it didn’t grab his heart, and it certainly didn’t make him want to spit out what he saw onto a canvas. He informed his teacher by asking, “Paint what?”.

If Walt isn’t touched, he won’t paint it. But trust me, when he is touched, the paintings come ALIVE, leaving no doubt in your mind that Walt was inspired. His artistic ability is 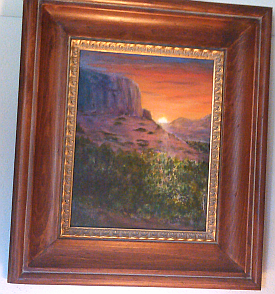 quite stunning. During darker periods of his life, Dolores remembers that Walt’s paintings had a “dark” tone. And as life changed, so did Walt’s color scheme. My husband and I enjoyed seeing the Long Island’s North Shore, Walt’s rendition of a well-known New York harbor and boat. His works inspired by scenic Sedona, AZ are truly amazing. Dolores explained that she and Walt displayed his artwork in downtown Yarnell for awhile, where the Yarnell Emporium is located now. However, his art is a hobby – not to make money, but simply for enjoying what he does.

That very same philosophy applies to Walt’s music. This is a musician who loves the music, has a great time performing and recording, but it’s not his occupation, which is exactly WHY he enjoys it. The music studio is a separate building, and is affectionately called “Wally World”. Yarnell Hill Fire threatened its fury, approaching two feet from destroying this cozy one-room gallery/studio. In fact, the flames destroyed an outbuilding on the neighboring property, which is owned by Walt & Dolores’ son, who resides primarily in Peoria. The Eckes’, like many of us, were elated and grateful to find that though threatened, they were spared. That elation was short lived when like us, they learned of so many lives destroyed by the fire in Yarnell. Inspiration struck again, as Walt and Dolores decided to create and promote the “Hidden Faces Benefit” at the Muleshoe Animal Clinic on September 21st. The variety concert was a tremendous success.  Dolores was the “keep everything straight for her husband, administrative genius” (and apparently she fills that role often!).  Walt was the advertiser and scheduler, using his extensive contact list of well-known musicians around the state of Arizona, which all agreed to volunteer that day. The proceeds benefited Petey’s Playground, a non-profit organization that provides pet services.  Petey’s Playground was an enormous help during and after the fire evacuation period, by providing pet care for many pet owners who were not able to provide for their animals. To Walt and Dolores, this was a “Hidden Face”, and they shared that passion with others. The result was an event that raised awareness and better yet – funds!

As my husband and I sat on a very comfortable couch in “Wally World”, Walt talked music 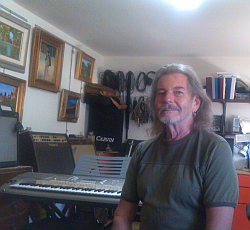 with me. He is an avid BLUES man, inspired by the blues greats: Eric Clapton and Muddy Waters, also known as “the father of modern Chicago Blues”. We talked about Paris James, who is a personal friend of Walt’s, and performed his blues magic at the Hidden Faces Benefit. We talked about recording background tracks, and several music-related things we have in common. He plays guitar and sings for one reason: something inspires him about a tune, and he simply enjoys it. As a fellow musician, I can safely say, there is only one way to be passionate about music, and Walt has the concept perfectly: music and art come from heart felt inspiration and emotions of the soul.

Walt and Dolores share an innate sense of humor. One of their favorite movies is “Idiocracy”, a sci-fi satirical comedy, about which Dolores finds several societal truths. She 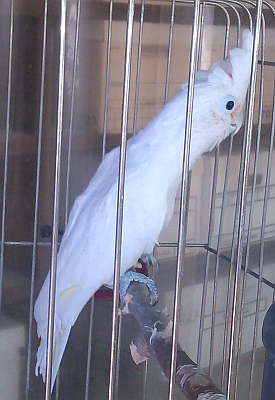 explains that the whole situation is hysterical. Walt’s quick witted jibs and jabs remind me of the character Hawkeye Pierce in the television sitcom “M.A.S.H.” Sometimes, if you’re not paying close attention, you might miss a good laugh!

The one thing he is most proud of to date: his son, who he describes as having “a good head on his shoulders, and turned out great.” The one thing that Walt would change to date: “Absolutely nothing. Everything in my life to this point has shaped who I am, and has enabled what I do…” – a commendable life statement, especially knowing that Walt, a retired US Marine, who served in Vietnam (1965-1966), was a POW for 39 days, leaving him severely mal-nourished, and forever scarred, both physically and spiritually. Yet, as he so aptly stated it: “There are no atheists in a prison camp.” He spoke regularly with the “Man Upstairs” while he was held by the NVA. And he credits the opportunity to escape as coming from the same. He has questions with no answers, but he counters them with the positives in his life:  his wife, children and grandchildren, his passions for music and art,  and all the opportunities he can embrace when something touches him.

Thank you, Walt Eckes. The things that touch you quickly become inspiration for others – because you live what you love! You’re a good man.
And thank you Dolores Eckes, you’re the great woman behind him. 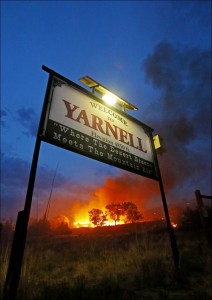 On June 30, 2013, my husband, Lou, and I were sitting on our porch and watching the Yarnell Hill wildfire ravish the mountainside across from us. We observed the planes dropping slurry to quench the flames, as well as the many firefighters and personnel scurrying to and fro to protect our beautiful community. The fire appeared to be moving away from us, when suddenly the wind shifted, and we were forced to evacuate at 4:30pm, with little time to prepare.

The striking events that took place will forever be etched in our minds: at the very moment we were being led to safety, the Granite Mountain Hotshot Crew from Prescott, AZ, Station #7, was being trapped by the engulfing flames….We were safe, but 19 courageous men died in that fire at 4:31pm, leaving a single survivor whose heart is irreparably broken.

Thank you, Firefighters.  Thank you Granite Mountain Hotshots. The Community of Yarnell is ever grateful.

In Arizona near Nowhere
The desert breeze greets the mountain air.
There’s a town, little known by name.
A lightning bolt from cloud to ground
Turned this village upside down
Yarnell would be forever changed.
Duty called, responders came.
A Hotshot crew and tanker planes
We all watched as ashes filled the sky.
Mother Nature knows no bounds
Flames encompassed all around
For some of them this was the journey’s end.

Hands of Mercy, Hearts of Courage
You have saved us from the flames
Blazing Honor, rest in peace now
Thank you for the sacrifice you gave.

A Hotshot crew of 20 men
19 gone and one remains
His heart broken, filled with pain
He worked with them side by side
Every day they risked their lives
Now his brothers are all gone

Heart of courage, how we thank you
For the blessings that you gave
Blazing honor, may God keep you
And happy memories comfort you today.

Hands of Mercy, Hearts of Courage
You have saved us from the flames
Blazing Honor, rest in peace now
Thank you for the sacrifice you gave. 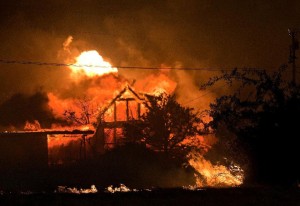