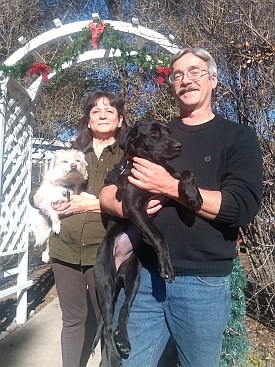 Devoted wife, loving mother, dedicated to community and a multi-talented lady, Trish Edwards is a beautiful person – inside and out. A visit to the Edward’s Glen Ilah home is inspiring. It is a place clearly filled with family love, happiness and a sense of “home sweet home”. Christmas decor was being slowly dismantled when I visited. The Roth Violin, which Trish has used for 43 years, was neatly in its case under the love seat. The family cat was stealthily sneaking around the corners, and Trish’s husband Chuck, newly retired, joined us for an interview. Family photos, great memories, and some sad ones were all shared. I was impressed by this couple’s transparency. One thing this author enjoys about Yarnell and its surrounding community is the REALNESS of people. The Edwards are REAL.

Trish was born in Scranton, PA and moved at a young age to a suburb of Cleveland, Ohio, where she grew up as the oldest of 5 children. She began playing the violin in the fourth 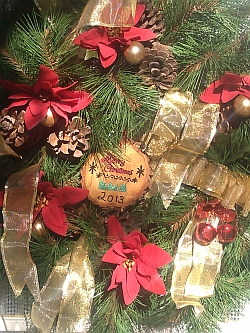 grade. During elementary school years, Trish and all of her siblings played instruments. One sibling played cello, another played flute, another coronet, one played piano, and of course, Trish on the violin. It was a family orchestral ensemble! Trish was the one who continued playing all through high school. She has had the privilege of playing in the Rock Orchestra in her Ohio High School, as well as the Parma Civic Orchestra and later was able to join the Phoenix Metro Pops Orchestra, all of which became valuable experience in her life.

Trish attended the University of Akron, graduating with her Bachelor’s Degree in Education. She would later receive her Master’s in Education from the good old “Lumberjacks” at Northern Arizona University. She is now retired from a rewarding school teaching career in Glendale, and still substitutes when she’s needed. Retirement for Trish is no lazy affair! She is very active in the community, serving on committees and volunteering where necessary. She also has several hobbies that engage her time at home. Notice the picture of the beautiful Christmas Wreath – a creation by Trish. She is versatile in her handcrafts, and is also quite the seamstress. She sews and embroiders by hand or with a machine. She also loves gardening, both ornamental flowers and vegetables. Trish is very active in the Presbyterian Church, playing the violin in a small group regularly. Her mentality is simple: she enjoys it! It’s not what defines her, but rather, she defines what she enjoys doing. 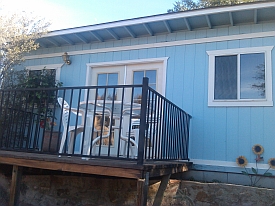 She met her other half, Chuck, in the old fashioned “Sadie Hawkins” method. She asked him to dance, and in fact, it was at Houlihan’s in Phoenix that the couple met in 1982. Chuck and Trish will be celebrating their 30th anniversary this June 29th. They both explained that they will never forget the date the Yarnell Hill Fire ignited, since it was their anniversary weekend. The property behind their home, right up against Walt and Dolores Eckes house, was burned badly. But thankfully, THIS time, their home was untouched. Once before, it was nearly destroyed by a lightning strike, in 1996. The Edwards bought the home in 1992, and at the time, it was their weekend get-away home. Their main residence was in Glendale, where they raised 2 beautiful daughters, Jessica and Allison. Both Chuck and Trish worked in Glendale, but really loved Yarnell/Glen Ilah. When the 1996 lightning storm hit their roof, nothing was left but a couple outside walls and the fireplace. A neighbor called to tell them the house was on fire. Chuck expounds, “The house was built in 1929, and had very 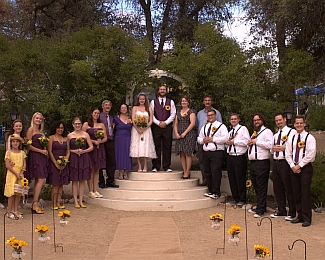 old electric, and nothing was up to code. My first thought was, ‘LET IT BURN'”, he laughed. “When the insurance money came through we were able to rebuild, so much better than before.” Trish added that these are the trials of life that make people stronger. She is right, and many of our residents can agree with that!

Chuck Edwards grew up in Neptune, NJ (one of my old haunts!). He is a year younger than his only sister. Chuck is no stranger to a houseful of women! God bless him. So, how does a Ohio Girl meet a New Jersey boy in Phoenix? That was my question. Both Trish and Chuck had done extensive travelling, and Chuck loved cross country trips. Both of them loved Arizona from the first visit, and boom – that’s how they got here. Chuck told an interesting story, which could almost be a “Twilight Zone” lost episode. He had been travelling cross country in 1977, and was filming randomly with his 8mm video camera. Years later, after moving to this area, he was watching the 1977 film, and realized that he had filmed the Highway 89 Yarnell Hill climb from Congress, never really remembering it, but also never realizing that he would actually LIVE in Yarnell someday! What’s meant to be is, well – meant to be… 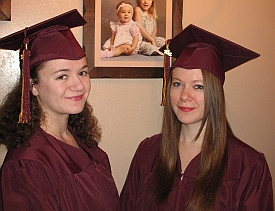 Chuck officially retired from his position at Fry’s Market in Glendale on January 3rd, 2014. He, like Trish, will never be in retirement boredom. For one thing, he has a great “Man Cave”, a beautiful little building in the back yard that he built himself, with a nice patio and sliding glass doors. It houses his entire movie collection, which is one of his hobbies. He has collected approximately 600 DVD’s including many favorites: Star Wars, The Winds of War (television series), and anything else he enjoys watching.

Another passion of Chuck’s is Elk Hunting, and in fact there are a couple elk skulls in the Edwards’ yard. The Mogollan Rim are is his Elk hunting territory. He explained to me that

Elk is a very gamey tasting meat, and many don’t like the strongness of it. Since I haven’t tasted Elk yet, I’m curious now! What’s included in Chuck’s retirement to do list? Volunteering for Community efforts. No one is quite sure if HE volunteered for this, or if he has BEEN volunteered for this. Chuck’s a good man, and he doesn’t mind, and for that, we are all grateful. At a recent party in honor of his retirement, we were all pleased to hear Chuck’s rendition of “Bad, Bad LeRoy Brown”. Sign him up! The man can sing…

Recently, Chuck and Trish had the honor of hosting their oldest daughter’s (Jess) wedding at their Glen Ilah home. They sold the Glendale house to their daughter and new son-in-law. The couple now reside full time in Glen Ilah. We are a lucky community! Their 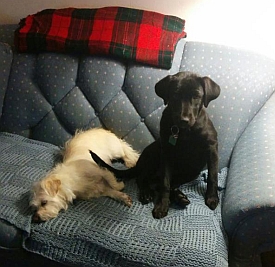 second daughter, Allison, is a graduate student in the field of Physical Therapy. As of now, Trish and Chuck have no grandchildren, accept of course for Ginger and Sadie, the canine kids. Ginger is the white cutie, and she is about 6 years old. They acquired Ginger from the animal shelter, and Trish explains: “She has a Con mentality”. You see, Ginger has a bad habit of stealing things, right out from under your nose. Chuck was working with tools, and Ginger walked away with them. Trish put something on the dinner plate, Ginger walked away with it. She was a sneaky sort, but they’re doing a good job of breaking the bad habit. Sadie is a black dog, a bit larger than Ginger, who they have owned for 5 months. For now, Ginger and Sadie are the “grand kids”.

I asked Trish what she would love to accomplish or do in the next five years, and she quickly responded that one dream she has to go camping in Europe. She wants to see the countries, but not from a train, rather from their RV. She wants to meet the people and really experience the culture, not in hotels, but by camping. What a great dream. And somehow, I have a feeling it will become a reality for them.

Thank you Trish, for the exemplary love for family and commitment to community you show us. And thank for sharing your talents and music whenever the opportunity arises. Chuck, congratulations on your new life venture; your positive and happy nature are contagious, and we all look forward to seeing the impact you will have in Yarnell. Here’s to the future!